Laval: Fire at recycling plant overcome after nearly a week 12-31-2020

On the sixth day of a fire at a recycling plant in Laval, Canada flames were finally suppressed on Thursday December 31st 2020. During the incident that almost extended into the new year, dozens of firefighters took relay to extinguish the fire and remaining hotspots. Recycled materials amassed at "Multi Recuperation Inc" near the interchange of H440 and H19 in the Vimont sector is gathered next to an immense and dramatic open pit mine. It has burned through almost an entire week since it ignited sometime during the day on December 26th 2020. Among different challenges like the weather at the open burning area, flames did spread through piles of vast amounts of debris at the quarry. During this lengthy operation, crews used various methods to put out the never ending advancing fire including the use of industrial front end loader backhoes. Despite minor health issues that some nearby workers and residents suffered, the "Ministère de l'Environnement'' (Environment Ministry) deployed their resources at the site on Saulnier Street and deemed it to be of no additional hazard. No serious injuries have been reported since the start of the fire on Boxing Day of last year in this multi day multi station fire battle. Crews remain on scene at this time to prevent re-ignition along with evaluating other possible environmental concerns. 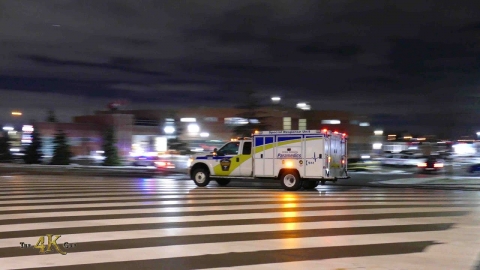